The History of Macaroni and Cheese

The History of Macaroni and Cheese

Have you ever wondered where in the world Mac and Cheese came from? We did and wanted to find out.

Making good food is all about the right combination of flavors. Some combinations work really well, other ones….well….they simply don’t.

The funny thing is some of the flavor combinations you see really don’t look like they would work, yet they end up working well. Just think of all the great flavor partnerships out there: peanut butter and jelly, apple pie and vanilla ice cream, bacon and eggs, spaghetti and meatballs, burgers and fries, butter and popcorn, rum and coke, pizza and beer, pumpkin spice and just about anything. They all come together to create something unique and delicious, and better than the individual parts.

Macaroni and cheese is another such combination. It has been a classic (if not the quintessential) American food since the Colonial era. But where did it come from? Who “invented” it? And how did it become one of the most treasured comfort foods of all time?

Let’s start with pasta, the one food that has become synonymous with Italian cuisine, and the foundation for macaroni and cheese. Though most people think of Italy when they think of well-known pasta variations and renowned pasta recipes, unexpectedly, the actual genesis of pasta lies elsewhere.

The Talmand, which contains the teachings and opinions of thousands of rabbis on a variety of subjects (Jewish ethics, philosophy, customs, and many more topics) has a reference to itrium, a kind of pasta that was cooked by boiling which was common in Palestine. This section of the Talmud was written in the 5th Century AD.

During the Arab conquests of Sicily in the 7th, 8th and 9th centuries, it is believed that African Arabs from North Africa (especially from Libya) brought pasta along with spinach, eggplant and sugarcane to the Mediterranean basin. By the 12th century, the Italians had learned from the Arabs methods for drying pasta to preserve it while traveling. The celebrated Italian-born food writer Marcella Hazan contended that the presence of Arabic people (from North Africa to the Byzantine Empire to Turkey) in the south of the Italian peninsula during the Middle Ages is the reason for the profusion of pasta in the Italian culinary landscape.

The word macaroni is derived from the Sicilian term for kneading dough forcefully, as early pasta making was often an arduous, day-long process. Dough was also kneaded for a substantial amount of time with the feet. What early macaroni dishes contained is not known, but many Sicilian pasta recipes to this day include Middle Eastern ingredients, such as raisins and cinnamon, which probably mirror original medieval recipes.

Many point to the origin of macaroni and cheese as being from a 13th cookbook named Liber de Coquina. The two authors were from France and Italy. Included in the cookbook is a recipe called “de lesanis” that many food historians believe is the first macaroni and cheese recipe. The recipe calls for the sheet to be cut into two-inch squares, cooked in water and tossed with grated cheese, likely parmesan.

The recipe sounds more like lasagne but it is probably the first recorded recipe that marries pasta and cheese.

Over the course of a century the pasta and cheese dish traveled from Italy to France to England.

England’s oldest cookbook Forme of Cury (1390), written by master cooks of King Richard II, contains a recipe called “Makerouns.” In modern English, it instructs its readers to cut a thin piece of pastry dough into smaller pieces, boil it in water, and cook it. Afterwards, the chef is to “take grated cheese, melted butter, and arrange in layers like lasagna; then serve.” During the late 15th century, this cookbook and its recipes were a prime source for households across Europe, serving as a guide to gourmet cooking.

The Experienced English Housekeeper and Macaroni

The first so-called modern recipe for a pasta and cheese dish was written in Elizabeth Raffald’s 1769 book The Experienced English Housekeeper. Raffald’s recipe calls for a bechamel sauce which is mixed with macaroni, sprinkled with parmesan and baked until bubbly and golden.

Macaroni and cheese are seen many times in 19th century cookbooks, but we could find no recipes that specifically mention cheddar cheese.

Some More on Cheddar

Before we travel to America, let’s remain in England for a little longer. There are some good reasons why England may have been the country where cheddar cheese was added to the dish. “Cheddaring” is a process that gives the cheese its namesake. Cheddar is also a village in England and specifically where the name came from. There are caves at Cheddar Gorge near the village of Cheddar that have the perfect humidity and temperature for making cheddar cheese. Cheddar cheese has been made since the 12th century and is currently the most consumed cheese in the UK.

So macaroni and cheese migrated from Italy to England. Since macaroni was mentioned for the first time in an English cookbook, and cheddar cheese was very popular, it makes sense the two were combined in England, though we have no direct proof. What does make sense is that the U.S. has very strong historical ties with England, so cheddar cheese would have migrated along with ever so many other things. The history of macaroni and cheese now leads us to America.

Macaroni and cheese trickled down from palaces to Europe’s aristocratic homes, where the dish was enjoyed well into the 18th century. Wealthy Americans who traveled across the pond fell in love at first bite and, eager to mimic the Continental lifestyle, started serving macaroni and cheese on their own tables when they returned home.

The poster child for this foreign food love affair was surely Thomas Jefferson, who first ate macaroni and cheese during a diplomatic stint in France in the late 1780s. Food historians are not sure where Jefferson exactly happened upon the dish, Paris or Italy, but nonetheless, he was enamored by it. Jefferson went so far as to have a macaroni maker shipped to Virginia for him to use.

Similarly, striving to credit the Jefferson family with all things connected to macaroni and cheese, myths go so far as to credit Jefferson’s cousin Martha Randolph with inventing the dish using macaroni and parmesan cheese after becoming the hostess at Monticello (his home) when his wife died.

Unfortunately, no written record of the Jefferson household’s macaroni and cheese survives, but a recipe by Mary Randolph from the 1824 cookbook The Virginia Housewife is probably much like what was served at Monticello.

However, Jefferson nor his cousin did the cooking themselves. According to written accounts, Jefferson only entered the kitchen to wind the clock. Many stories fail to mention that cooking at Monticello was done by enslaved people.

Arriving in Paris, James was apprenticed to a caterer named Combeaux who provided Jefferson’s meals during the first year of his stay in Paris. He then underwent more training with chefs at the Château de Chantilly, a five star kitchen of 18th century France.

In particular, Jefferson’s enslaved chef, James Hemings, is uncredited in many accounts for encountering macaroni and cheese while with Jefferson on a trip to Europe, and in preparing the dish for guests upon their return to Monticello.

James was 19 when he sailed with Jefferson from Boston to Paris. His sister Sally, who was about 14, was also on the voyage (she was a slave who bore six of Jefferson’s children).

James learned quickly and became chef de cuisine at the Hotel de Langeac which was Jefferson’s private residence on the Champs-Élysées. He received wages, albeit half of the previous chef, and used a portion to pay a tutor for French lessons.

French law held that any slave that stepped onto French soil would be free if they chose to legally pursue that option. Hemings and his sister did not. Different reasons have been researched for why they chose to return to slavery, but according to NPR it’s likely that they didn’t want to remain in France separated from the rest of the family.

Upon returning to Virginia, Hemings brought revolutionary changes to colonial cooking including European-style macaroni and cheese, though (as we have noted) no written recipe has been found.

James Hemings was one of only two slaves to be freed by Jefferson on the condition that James would train his younger brother Robert to replace him as chef in Jefferson’s household. Sadly, James died at 36, in 1801. His only material legacy was an inventory of kitchen utensils and four recipes. Hemings’ considerable influence on American food culture include the introduction of macaroni and cheese, ice cream, whipped cream, and french fries for the first time in America. Many of these dishes have been attributed to Thomas Jefferson when they were actually Hemings’ own creative interpretations of French haute cuisine.

In 1802, Jefferson served a macaroni pie at a state dinner, more than likely prepared from a recipe by James Hemings and cooked by his brother Robert.

In the first half of the 19th century, macaroni and cheese remained a dish for the elite. In the early days of the republic, macaroni was not readily available, and ordinary Americans did not know how to make quality pasta nor could they afford the Italian cheeses that were used in the dish at the time.

There aren’t many historic references to macaroni and cheese being prepared in slave cabins, as the ingredients were rare and expensive.

However, as the industrial revolution took hold, factory production of macaroni and cheese made the dish much more affordable, accessible, and popular among lower classes. Even further, the individual ingredients (and replacing parmesan with cheddar) of macaroni and cheese declined in price making it a much more practical meal for impoverished communities.

After emancipation, macaroni and cheese took on many dispositions with the Black community: it became a dish for celebrations, a handy comfort food, and a penny pinching meal for poor families.

Poor households, relying on government and other relief entities, often received macaroni and processed cheese, the fixings of a quick meal.

After emancipation, macaroni and cheese took on many dispositions with the Black community: it became a dish for celebrations, a handy comfort food, and a penny pinching meal for poor families.

Poor households, relying on government and other relief entities, often received macaroni and processed cheese, the fixings of a quick meal.

This is the century when macaroni and cheese took off in a big way. In 1937, Kraft began selling the boxed version that is still popular today. It was a big deal. One box could serve four at a very affordable price in a time period where the average American was still feeling the impact of the Great Depression. Then, during the food rationing of WWII, macaroni and cheese became an even more valuable food. Shoppers could get two boxes of the stuff for one food stamp. This is when the dish entered “great American” status.

Over the years, every home cook has homemade recipes that include pasta, butter or cream, and parmesan cheese, American cooks improvised using cheddar, Colby, or even processed cheese like Velveeta, and spices like nutmeg and paprika. Today, gourmet versions call for a variety of cheeses including Gruyere, smoked Gouda, Monterey Jack, Havarti, and add- ons like bacon, shallots, and even truffles.

Macaroni and cheese is the all-time comfort food. No matter how old you are, mac and cheese fills your stomach and soothes your soul. There is nothing better than a bowl of pasta and melted cheese to make a day brighter and put a smile on your face.

For the macaroni and cheese

For the Topping (Optional) 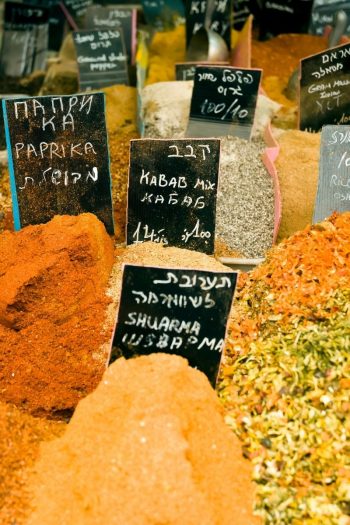 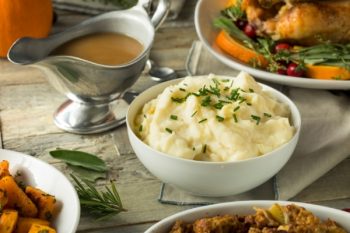 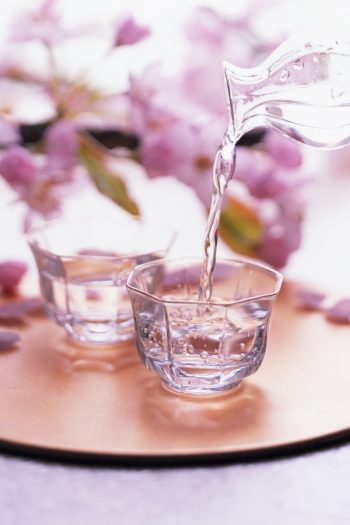